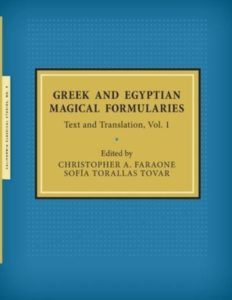 The magical formularies on papyrus are precious witnesses to practices and processes of cultural transmission: i.e. the creation, communication, transformation and preservation of knowledge, both in text and image, across history and between the cultures of Egypt and Greece. More than eighty such handbooks survive, some of them in a fragmentary state. Our book, the work of an international team of papyrologists and historians of magic, replaces Papyri graecae magicae edited by K. Preisendanz, which appeared almost a century ago and has been used as one of the most important sources for the study of Greek magic, augmented in the 1990s by the excellent work of R. Daniel and F. Maltomini, the Supplementum Magicum. Our project has collected all the known magical formularies and fully studied both their materiality and their texts.  The facing English translation with notes replaces The Greek Magical Papyri in Translation, edited by H.D. Betz.  This volume, the first of two, presents the earliest of the handbooks, fifty-four in all, spanning the period from second century BCE to third century CE, in a new edition which includes the original texts in the three languages (Greek, Demotic, Coptic) with a full material description and a facing translation with commentary.

I cannot add anything, except that it is a great honour and pleasure to be part of this team and to finally see published the first volume of this project, in which I have been part of the editorial team of GEMF 30 (the former PGM VI + II).