From 25 to 30 July 2022 the 30th International Congress of Papyrology took place in Paris at the College de France. Every three years, this congress brings together papyrologists from all over the world to share their research and work. 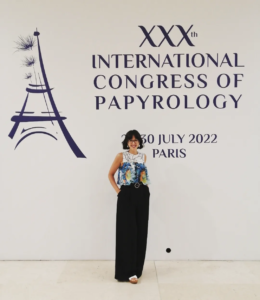 In this context, I have presented a sample of a research project that I would like to develop over the next few months: the study of recipes for the preparation of historical inks from Greco-Roman Egypt.

There are many testimonies of recipes for the preparation of inks that have come down to us from the ancient world. 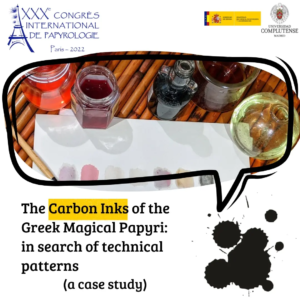 Their study may seem trivial, because in our current culture we have normalised the act of writing, but the story of ink is the story of a technological invention that revolutionised writing and, with it, the transmission of ideas, our ability to communicate and the preservation of knowledge. The so-called Greek magical papyri (papyri that transmit ritual practices of a non-normative nature) contain several recipes for preparing inks. In this paper (“The Carbon Inks of the Greek Magical Papyri: in search of technical patterns”) I focused on a single case study with the intention of demonstrating two arguments: first, that beneath the apparent diversity of the recipes, some are traceable to the very same method; second, that some of these ritual inks are -as in the case study- ordinary inks adapted to a ritual use.